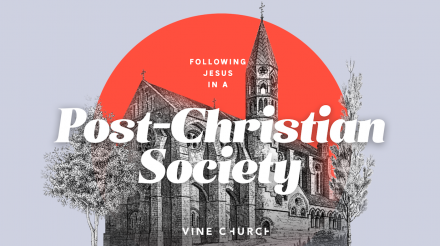 You are living in a post Christian society. Between 2011 and 2016 almost 1 million people stopped identifying as 'Christian'. Where did they all go? They didn't become Muslims. Or New Age. Nether did they become atheists. As far as we can tell, most of them still believe in God in some way. What they have become is 'post Christian'.

A post Christian society is not a society devoid of Christianity, but one which is in the process of parodying, deconstructing and reappropriating the Christianity they have rejected.To be a Christian in 2021 is to swim against the cultural current. And that's hard!

Is Christianity dying?
What if I feel ashamed of following Jesus?
How do I tell people I'm a Christian?
What's the future of the church in Australian?

Join us over October – November  as we host an array of guest speakers who will show us what the Bible teaches about following Jesus in our post Christian society.